skip to main | skip to sidebar

a collection of inspiration, stumble-upons, and possibilities 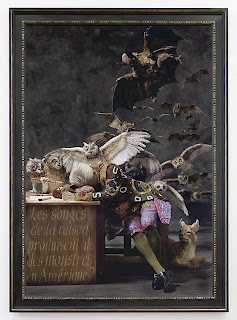 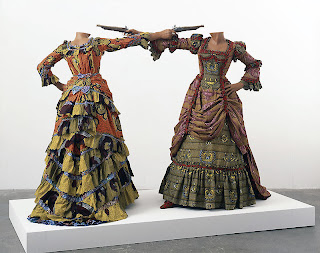 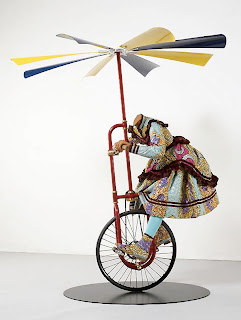 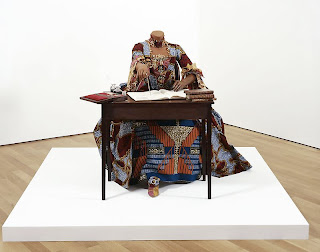 Yinka Shonibare was born in London, England in 1962, but was raised in Nigeria. He studied at Byam Shaw School of Art and London Univeristy. He challanges the idea of cultural identity in his work. He works in a variety of mediums including painting, sculpture, photopraphy, and film. His work strongly reveal his love for art history, literature, and philosophy. I like the twist he puts on tradition and colonialism. He incorporates different fabrics and patterns, which brings in that questioning of cultural identity. It also brings forth something refreshing in what we are so used to looking at when it comes to the subject. My favorites of his are his recreations of Goya's "Sleep of Reason". His series of these include different cultures. The one I have included at the top is that of America.
Posted by popsicliz at 1:36 PM No comments:

Just something that I drew from spring break boredom 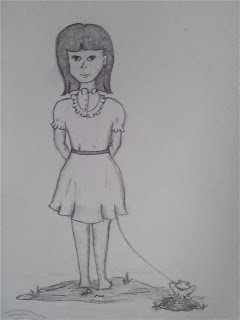 Posted by popsicliz at 2:01 PM No comments:

So I "stumbled-upon" this short film. I thought it was kind of cute(because I don't know any other word to describe it), so I'd thought I'd share. Here is the link to it: foreversnotsolong.com
Posted by popsicliz at 6:54 PM No comments: 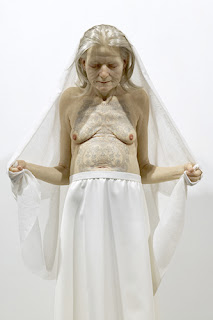 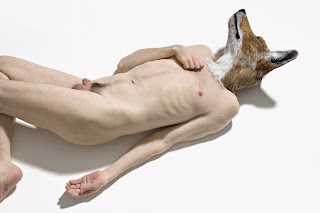 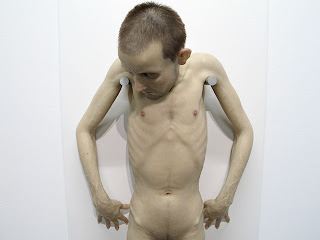 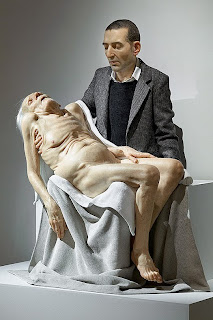 Hyper-realist sculptor Sam Jinks is from Melbourne, Australia. He draws attention to life's disposability. His work is also about how one changes mentally, not only physically from sickness. He plays with the psychological effects sickness, old-age, and death have on individuals. His pieces reflect on the inner-most workings going on through the human mind in all aspects of life. A thought is brought forth into reality, which may be part of the reason why he has chosen to portray these figures in such a realistic light. I like the realness in Jink's work. Not just because they look real, but his sculptures also express how we feel about certain things in a very real, almost surreal, light.
Posted by popsicliz at 5:56 PM No comments: 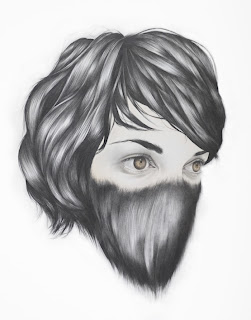 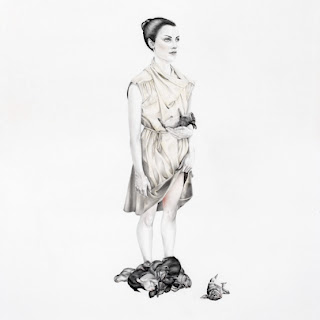 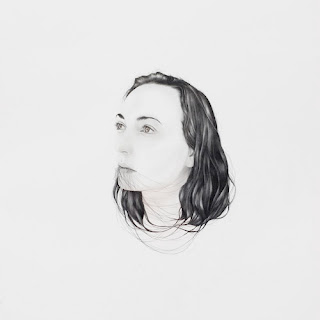 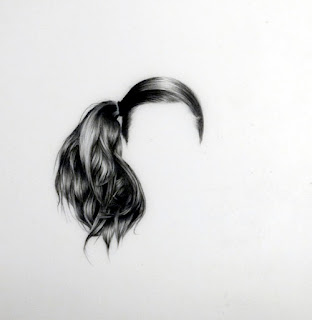 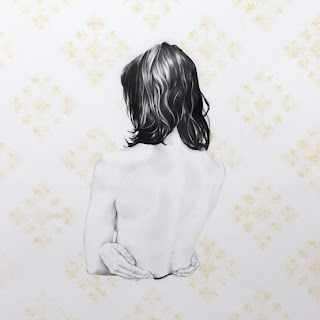 Brooklyn based artist Langdon Graves does a variety of work in regards to her stance on femininity and the role of women. She is a professor at Parson's in NYC. She has done sculpture, as well as drawings in regards to subjected femininity. I really enjoy her work. I find it rather beautiful and haunting at the same time. The detail in the hair is amazing, and her soft, limited color pallet really brings out a slight eeriness, which I love. I really love her drawings more than her sculpture, which is why I chose to solely include some.
Posted by popsicliz at 8:45 PM No comments: 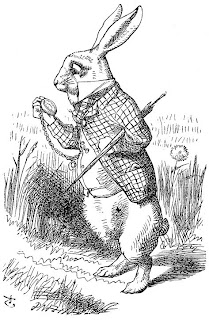 Posted by popsicliz at 2:25 PM No comments:

My latest music addiction:
Yeasayer-Ambling Alp
Posted by popsicliz at 2:10 PM No comments:

Response to "On the Rights of Molotov Man" 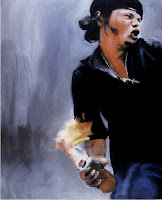 An article by Joy Garnett and Susan Meiselas
Above top: Meiselas, Above bottom: Garnett
Posted by popsicliz at 11:44 AM No comments: 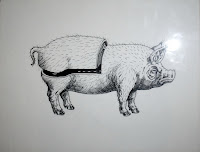 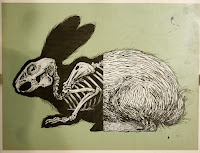 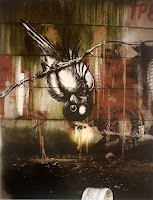 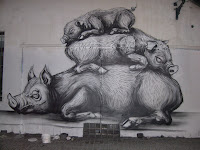 From "Prescription Art": "Hailing from Ghent in Belgium, Roa's characteristic animal graffiti has won him admirers all round the world. Playing with scale and distortion, the creatures are at once familiar and slightly otherworldly."--I came across the work of Belgium artist Roa when I googled the words "rabbit drawings" and came to a conclusion that google doesn't really stick to relevant topics too much because the the drawing that peaked my interest was that of the dissected pig. Needless to say I did find a rabbit drawing of his I liked. So I gotta love google for that though because I really liked some of his work.I also really liked what "Prescription Art" had to say about his work so I thought I would put it in.
Posted by popsicliz at 11:54 PM No comments:

Super excited for Alice in Wonderland this week...just sayin
Posted by popsicliz at 9:36 PM 1 comment: 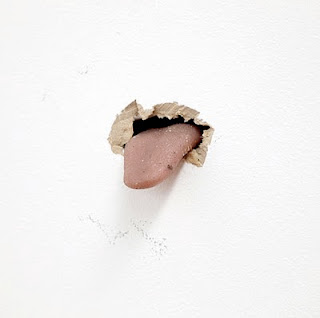 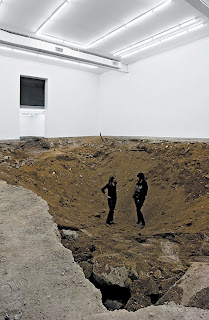 So I really don't know how I had not heard of Urs Fischer until today.I kind of love his randomness. It's almost a jealousy. Fischer is a Swiss artist. He started off as a photographer,but has grown quite popular for his installations. Especially after he excavated the floor in a New York art gallery. 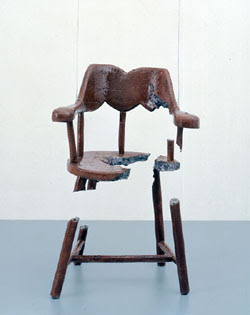 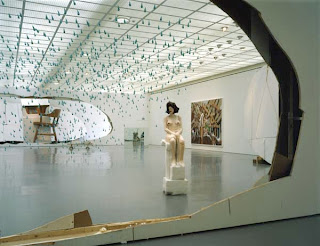 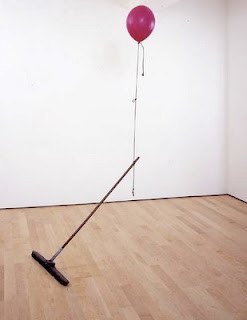 Posted by popsicliz at 9:48 PM No comments:

popsicliz
...so my name is Liz, and this is a dip inside my mind. Art is my drug. I do a lot more randoms on my tumblr blog; listed in links